October 27, 2009February 17, 2015
While I dedicated most of my time and energy to decorating for the reception, I wanted to make sure the gazebo had just a few touches that tied everything together. To save time and money, I only decorated the 10 chairs that lined the aisle. I bought a long spool of wide sheer satin, tied it around the chair in a big bow and added a silk rose accent. 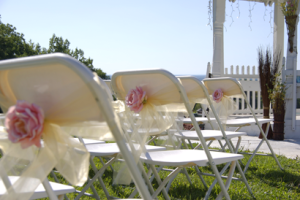 I found these simple rusty wire and grapevine sconces at Hobby Lobby and knew they would be perfect for the two front columns of the gazebo. I didn’t want large flowers to be distracting, and these wispy wildflowers were just right. 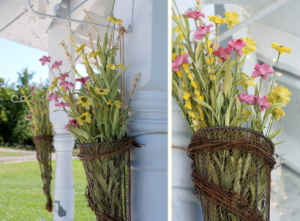 A turn down the wrong aisle at Target one day led me to these grapevine accents (which my mom had previously found and I totally forgot about). Two on each side was just enough color and texture.

When it came to music for the ceremony, I was at a total loss. I, of course, turned to all of you for help and received so many suggestions! (You can read them all here.) A couple days before the wedding, I finally decided on two songs that had been lingering in the back of my mind and just felt right.
I walked down the aisle to In My Dreams by Josh Turner, and we chose L.O.V.E. by Nat King Cole for the recessional, at which point we were also surprisingly bombarded with scented jasmine hulls that my mom secretly picked up – scared the heck out of me!

Later today I’ll have more pics of the reception decor I put together along with a tutorial on the napkin rings we made, see ya then!

2 thoughts on “Ceremony Decor and Music”

Hello! I'm nicole, a.k.a. lillyella. I spend my days livin' the dream on a small farm in southern Colorado with my husband and our furry flock.

Hello! I'm nicole, a.k.a. lillyella, and I spend my days livin' the dream on a small farm in southern Colorado.